There is always a ship going to Tarshish 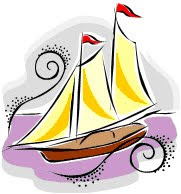 When Jonah ran away from the Lord’s directive to go to Nineveh, he decided to head in the opposite direction and as far as possible. Tarshish was a viable alternative. Jonah probably reasoned there were a lot of people in Tarshish that needed to hear about God. Furthermore surely God would want to be kind and compassionate to the people of Tarshish. Any people group was going to be a whole lot nicer than the war loving people of Nineveh. He arrived at the port and found a ship going to Tarshish. How convenient! In Jonah’s day when travel wasn’t what it is now, I don’t imagine that there were ships going to Tarshish every day or even every week. It must have seemed to Jonah that God was releasing him go to Tarshish…

I have seen it happen. An individual or a church is facing a challenge to step out in faith and do something they have never done before, but they pulled back. And lo, and behold, a ship going to Tarshish shows up—a viable alternative. An alternative that is a whole lot safer than the challenge. An alternative that looks attractive, and one that can be justified, but one that will take them in the opposite direction to God’s plans.

Christians love to put restrictions around things that God has not.