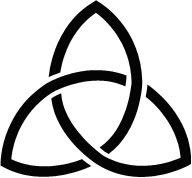 Lately I have been writing a few posts about theology and today I thought I would write about the Trinity. I typed “trinity” into clip art and this picture appeared. It’s one of those clever things; what you focus on determines what you see. It seemed an appropriate diagram to begin a discussion about the Trinity.

Basically the Trinity means three persons in one Godhead. Some people don’t believe in the trinity because the word is not in the Bible; however the concept is. I don’t think God would object to us coming up with a word to help us understand him better. Nevertheless if you have a problem with the word, trinity, that’s fine. If you have a problem with the concept than that is a more serious concern.

The Trinity emphasizes an important truth which is God the Father is God (1 Corinthians 8:6), Jesus Christ is God (John 20:28), and the Holy Spirit is God (Ephesians 4:30). Yet we believe in one God. While this is hard to comprehend I think we need to bear in mind that if we could understand God with our finite minds then he wouldn’t be much of a God.

Some say that Jesus never claimed to be God which I find quite strange. I mean the very reason the Jews orchestrated his death was because he was claiming to be God (John 5:17-18).

It is also interesting that in Genesis 1:1 we find: “In the beginning God created…” The word for God is plural but it is followed by a singular verb. In v.26 we find: Then God said, “Let us make man in our image…”

These verses have led some to refer to God as “they” which isn’t unscriptural as God has used plural words to refer to Himself. As long as we remember, “…the Lord our God, the Lord is one” (Mark 12:29).

Jesus was always quick to give his disciples opportunities for service.