The King still has one more move 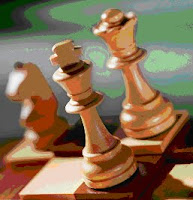 I love it when Australian sports people snatch victory from the jaws of defeat and it happened this week. Australia played Pakistan in cricket. It was rain delayed yet Ricky Pointing, the captain, still decided to bat even though it was overcast. The Australians were all out for 127, then Pakistan batted and made 333. Australia were 206 behind. Australia batted again, by the end of the third day they were 8 for 286. They were a mere 80 runs in front with only 2 wickets in hand. The next day Australia went on to make 381. Pakistan needed 175 to win. However they were all out for 139. For three days Pakistan had the upper hand but Australia managed to bring off an amazing win.

These kinds of events remind of a story I read about a painting of a chess game. The painting was called, Checkmate. However when a chess master saw the painting he realized there was a problem and exclaimed, “the name is wrong…the king still has one more move!” The analogy is, of course, that God has one more move. His is always the final move. And cricket games like the one played this week remind me that it’s not over ‘til it’s over. It reminds that when I’m facing defeat, God can make a way where there seems to be no way. It reminds that whatever I’m facing, the King still has one more move!