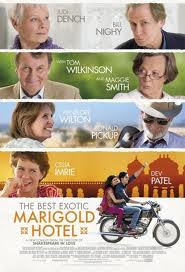 I went to see The Best Exotic Marigold Hotel at the movies last week. In keeping with Hollywood culture, it was completely implausible; nevertheless it was also very funny. Maggie Smith in her role as a racist old lady was particularly amusing.

My favourite line in the movie which was repeated several times by Sonny, the character played by Dev Patel was: “Everything will be all right in the end… if it’s not all right then it’s not the end.”

This is a Christian thought. God has a plan and his plan is moving towards a climax where wrongs will be righted and everything will be as it should be. It will be alright in the end. In the meantime everything is not alright. Tragedies happen, depression seems rampant, disappointments overwhelm, and life is more difficult than it should be. However this is because this is not the end. We are short sighted and earth bound creatures. Life on earth is not all that is going on. Paul tell us in 2 Corinthians 4:18 to: “fix our eyes not on what is seen, but on what is unseen, since what is seen is temporary, but what is unseen is eternal.”

As Christians we have hope knowing that God is in charge. The book of Revelation speaks of a new heaven and a new earth; it speaks of no more death and suffering; it speaks of God wiping away all our tears. God has promised for those who trust him everything really will be alright in the end.