Thankful for the rain 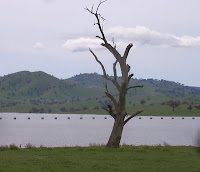 I read this on the web today: “The drought in New South Wales has officially ended after more than nine years, with none of the state’s regions drought-declared. At the height of the dry spell in 2003, 99.5 per cent of New South Wales was in drought.”

I personally find the whole climate change issue overrated – not non-existent, but certainly overrated. The photo here is of our local weir which a few months ago we were told would probably never be full again or that it would take a decade to fill. Yet here it is about 95% full. For some reason the long term cyclic nature of our weather patterns is ignored.

So while the floods caused a great deal of damage it is lovely to see everything so green, paddocks with grass, water in dams and for that I am thankful.

2 thoughts on “Thankful for the rain”