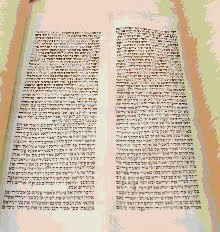 None of the views, mentioned in my last post, accurately portray God’s intention. God wants us to know Scripture is “God-breathed” not dictated but totally inspired by God right down to the very words that were used. God did not take over the hand of the author, neither does he leave the author to his own devices.

Over many centuries and in many different settings God inspired a wide variety of people from different backgrounds, to write down stories, events, histories, poetry, songs which eventually became known as the Bible. The Bible also uses figures of speech, pictures, parables and allegories much like we do today. God did not dictate the words but nevertheless inspired the authors to write down the exact words that He wanted written. God was able to do this because it had always been part of God’s plan for these authors to complete this task so God had been arranging the exact education and upbringing so they would write in the way He desired. As time passed, God’s word was translated into many different languages. Yet we can have confidence the original meaning has been preserved as historical finds have helped us realized just how accurately the Scriptures have been handed down to us.

It is interesting to reflect on the fact that in the same manner as God inspired the Scriptures, God works in our lives. He does not turn us into robots or puppets nor does he abandon us; but rather he works through our lives.

How did God inspired the Bible? Previous
1 Corinthians 12 Next