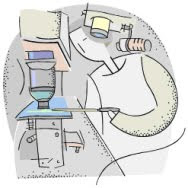 There is a growing number of people who claim that the only things that exist are what we can see, hear and touch. That is, the universe is purely a physical universe. This is a dubious claim for several reasons. Science cannot explain love, justice, beauty, goodness, wisdom. These are things that we cannot see or hear yet we know exist but there is no scientific experiment that can prove their existence. Science can’t answer why the universe is here at all when there could have just as easily been nothing. Likewise how do we prove the past? How can we prove that the universe didn’t just “pop up” 200 years ago and that it arrived in a decaying state? Science cannot explain the self-sacrifice of many of our heroes. Nor the sense of right and wrong that exists in almost every culture, and the similarity of the things that are considered wrong, murder and adultery, for example.

Another consideration is that materialism tells us that we are only physical beings and that belief is just a structure of protons. Evolution is only about adaptable behaviour and doesn’t care about truth. It modifies protons based on survival. It would mean we could not trust our cognitive faculties because these faculties would not be based on truth but only on what is helpful to our survival. Therefore it could be argue that atheistic belief is merely a survival tactic and given the amount of people who have lost their lives because of their faith this would be a logical conclusion.

Science also cannot answer all our questions because science works on observation and experimentation. There are many things in the universe that we still have not been able to observe or been able to conduct suitable experiments to prove. Many times we cannot provide a perfect control group. So the demand for proof is unrealistic, even scientists don’t expect to be able to prove anything. Mostly they are satisfied if they obtain a high degree of probability with a low margin for error.

We would prefer concrete evidence for being a Christian.