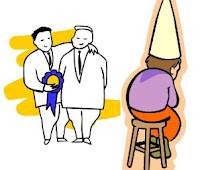 Some time ago, (before I started blogging) I read, Punished by rewards : the trouble with gold stars, incentive plans, A’s, praise and other bribes by Alfie Kohn (Houghton Mifflin, 1993). It has since been republished a couple of times. When I read it, I was fascinated and it seemed to me to accurately portray the problem with relying on a system of rewards and punishment to motivate people. Kohn summaries the reward and punishment system in six words: “Do this and you’ll get that,” (Kohn, 1993, p. 3). Often when I read a secular book I think to myself if this is really true the principle would be somewhere in the Bible.

Lately I’ve been reading Larry Crabb’s new book, 66 Love letters. Each chapter is about a book of the Bible and the chapters follow the order of the Bible. It is fairly heavy going and it will take me a while to finish, however today I read the chapter on Judges. If you are familiar with the book of Judges it is a fairly depressing account of how God’s people continually went through a cycle of behavior which went like this: God’s people disobey him, they are oppressed by their enemies, God’s people cry out to God, God sends a deliverer who defeats the enemy, there is a period of peace before God’s people again disobey him and so the cycle continues. In reference to this, Crabb writes, “…no system of reward and punishment changes what’s really wrong with people (p.29). The reward of peace did not keep God’s people from disobeying God and neither did the threat of punishment. It only worked in the short term, and this is also Alfie Kohn’s point.

To look at what really changes behaviour is not my point here but rather to emphasis the fact that rewards and punishments don’t create long term changes.

(If you want to know what does change human behaviour, check out this devotional thought which I wrote last year.)

Book Review : Speak up with confidence Previous
1 Corinthians 7 Next