On writers who critique 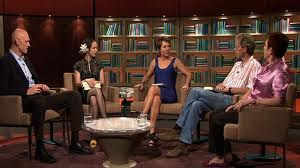 From time to time I watch the ABC’s First Tuesday Book Club. I watch it expecting to enjoy the show because I love books but I find that often I don’t. I have more of a love/hate relationship with the show which I couldn’t quite work out until I read this comment by Mike Duran: “Writers must wrestle with the technical details of a story while trying to enjoy it. Readers only want to enjoy it.” Mike Duran on Rachelle Gardner’s blog

It occurred to me that the panel members on the First Tuesday Book Club are all writers, either journalists or authors. They don’t read a book the same way that readers do. These writers, in my opinion, are overly concerned with the technique, the style, and the way it has been written. Someone who is a reader only cares about the story. They want characters they can relate to and dilemmas that they are familiar with. They read for enjoyment or to escape reality for a while and will often overlook flaws in the writing.

One time, one of the panellists on the First Tuesday Book Club complained bitterly about how poorly a book had been written but then concluded with the comment that book club members would love it. I sat there thinking, but isn’t that the point? Don’t people write so readers can enjoy the story? Granted that if a book is really poorly written it will distract from the enjoyment of the reader but this is actually improbable. If the book has been published by a traditional publisher it is unlikely to be really badly written. After all why would a publisher published a poorly written book when they have access to editors? So really it becomes about writing preferences.

At the moment I still read like a reader not like a writer. I overlook technical issues with books and often it is because I’m so engaged in the story. I think this is a good thing and I hope I don’t start reading like a writer.

2 thoughts on “On writers who critique”