Home | Blog | On giving up caffeine

On giving up caffeine 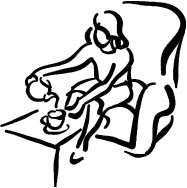 I started drinking tea as a kid and by the time I was 20 I was drinking 6-7 cups a day. At the time this didn’t seem unusual and I suffered no ill effects. Over the years I have cut back and replaced some cups with water and some with decaffeinated tea which apparently reduces the caffeine content by about 90%. I’ve never drank coffee which has a higher caffeine content per cup.

The reason I cut back my caffeine intake is not because it is causing me any problems – it is only a problem when I stop, and often I unintentionally stop when I go on holidays. When I am at home I drink tea regularly throughout the day but when I’m away I forget. I’m out and about and don’t consider the fact that if I don’t have a cup of tea I’m going to end up with a headache. I dislike the idea of planning my holidays around my tea drinking habits. Furthermore I really only like plain, ordinary tea. I’m not even a fan of English Breakfast and I’m finding these days some cafés don’t sell plain, ordinary tea. So I’m faced with the further dilemma of buying a favoured tea that I don’t really like just to prevent myself getting a headache when I’d really prefer to have a hot chocolate.

Prior to my last holiday I had cut back to one cup of ordinary tea and one cup of decaffeinated tea a day. Then whilst on holidays I decided to only drink three cups of decaf tea a day.

The first week was okay. I had a few headaches but it wasn’t too bad but the second week was worse. I was having headaches every day and sometimes they were quite severe. Things were better the third week and now it’s been a month I’m fine. However I’m still having some caffeine.

At this stage I’m going to stick to my three cups of decaf tea a day and see what happens next holiday.

Does anyone else have a story about their caffeine habits?