Of droughts and flooding rains 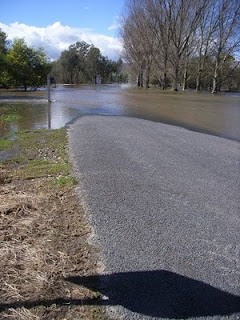 In 1904 Dorothea Mackellar wrote a poem called, My Country. In it she compares England with Australia. She describes Australia as a land “Of droughts and flooding rains”; not much has changed in 100 years! It is a poem that resonates with me because I was born in England and understand the comparison.

On the weekend we experienced flooding rains after being in drought for many years. There had been quite a lot of rain in the last couple of weeks so the ground was already damp which created the ideal conditions for a flood.

For me it created an interesting set of circumstances. My pastor husband was away conducting a wedding and had asked me to preach, just preach, nothing else. I’m not an experienced speaker so I had prepared well in advance and was all set to go. Then it rained, big time. Many of the people who attend our church live on the other side of a major river. The river flooded (see photo, that’s the road in the foreground). On Sunday morning about an hour or so before church I learnt that about half our congregation would not be able to make it so there would be no musicians, no sound person, no communion leader, no Bible reader, no Kids church, no helpers…

I sensed God was asking me “to step up to the plate.” So I did. I asked for a few volunteers but did quite a few things myself; including some things I’ve never done before. The congregation was about half its normal size and they were very gracious. It will be a Sunday I’ll remember for a long time.