Home | Blog | Not the only unobservant one

Not the only unobservant one 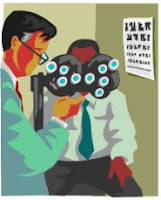 My daughter thinks I am unobservant. She came to this conclusion in her final years of secondary school. At that time students were not obligated to wear school uniform. My daughter told me if she were kidnapped I would not know what she was wearing. This is completely true. In my defense I would like to say I do notice things that are important to me and what one wears is not.

I had an incident this week that made me think I’m certainly not the only one who is unobservant. Six months ago we moved the shelves in the library. The non-fiction was on the left as you walked in the door and the fiction was on the right. Now both fiction and non-fiction are on the right. In order to fit all the shelves in the right hand side they were turned 90º. This was a major change and completely altered the look of the library.

However someone came into the library this week, placed a book they were returning on the desk, turned towards the section of the library where the non-fiction use to be, and asked for a book about dog training. As they turned, they were surprised and said, “Oh, you’ve moved the shelves around!”

I didn’t bother to explain they were moved six months ago. After I showed them where the dog books were, I went back to the desk and returned their book. I was almost expecting it to be six months overdue but no, they had borrowed it a fortnight ago!

Devotional Thought : 1 Corinthians 16:9 Previous
Everything can change in a day Next