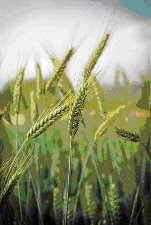 I have been leading some studies on the book of Ruth lately and although it is an old story it is a story of how to respond in faith during times of trial.

Naomi found herself economically and spiritually bankrupted on the death of her sons who died without fathering any children (heirs). Her retirement plans were in tatters, without an heir she was left without the one thing that really mattered. There was nobody to raise up an heir to her husband’s name and this was the greatest tragedy imaginable. The most important thing to a family in Israel was to have an heir who would inherit the land – it was God’s land that they were holding for him. If they didn’t have any sons, then their name would cease to be, it amounted to being annihilated. Naomi was left in a foreign country without husband or sons and without hope of ever having a son to continue the family name. She returns to Bethlehem a bitter woman. Ruth accompanies her yet what benefit is there in having a Moabite for a daughter-in-law? However only about a year later the women of Bethlehem tell Naomi that Ruth is better to her than seven sons! (Having seven sons was considered the perfect family.) God can bring about blessing from the most unexpected places if we trust him.

In times of trail we remind ourselves that God is working behind the scenes for our good. God was undetected as He orchestrated the events of Ruth’s life. She happened to find herself working in Boaz’s fields. When she told Naomi about Boaz’s kindness towards her, Naomi responds, “The Lord bless him!” Against all odds a relative of Naomi’s husband shows an unexpected interest in her daughter-in-law. Even through her difficulties Naomi can’t help but see the hand of God. Do we so readily see God’s hand in all our circumstances?

Then, at the appropriate time, Naomi must take action. She sends Ruth to Boaz to ask if he will fulfill the role of a kinsman-redeemer. God requires that we too take action. As we trust God, he will make it clear to us what action we need to take. Perhaps there are people in our lives we need to ask for help.

There were more difficulties in Ruth and Naomi’s situation which Boaz promises to resolve if he is able. Ruth is told to wait and Naomi must wait too. Waiting is such hard work! However as we trust God with all the circumstances of our lives he will bring about his good purposes.

There are many lessons from Naomi’s story. However the thing that kept Naomi going in her time of trial was an unshakeable belief that God was controlling all her circumstances and that he can be trusted even in the bad times.

This is part of a synchroblog about faith in these hard times – looks like being a small synchroblog this month:

Beth Patterson: Hope and other non-sequiturs
Ellen Haroutunian: Finding hope when the money is gone
K.W. Leslie: Tough times… when your sense of proportion is out of whack