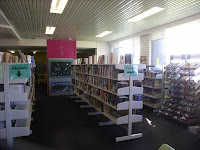 Working in a country public library must be one of the most stress-free jobs in the world! I have worked in other types of libraries which have various stresses. For example I worked in a university library for a year and during that time came across three students in tears mostly because they had left assignments to the last minute and now the books weren’t available. I also came across some very angry students. The angry ones were generally upset about their overdue fines which started accumulating from the day they were late at the rate of 20c per day per item. While that doesn’t sound a lot, students tend to borrow a lot of books at once. So if you borrow 10 books and you are five days late you quickly have a bill of $10. And if you had a debt of $10 you weren’t allowed to borrow any more books. So there was some stress working in a university library. I have also worked in school libraries. Working in a school environment is automatically stressful! Enough said.

Then I worked for a time in public libraries in metropolitan areas. While there weren’t as many stresses as a university library there was still the problem of people with overdue fines, people trying to steal books and students doing research assignments with short time frames. Plus the general stresses of working for bosses who had their own particularly idiosyncrasies. Then I moved to my current position—a librarian in a country public library. Most of customers read for entertainment and recreation so if a book is unavailable, missing or delayed it is not a big deal. Our non-fiction section is for general interest and not intended to support research so I don’t have stressed out students. I am the only library worker in the building. My boss is 120k away so I’m pretty much free to run the library the way I like. We only charge overdue fines if we have to send a reminder letter. These are sent from head office and you only get one if you are two weeks late. I do have a couple of more difficult customers but every job has their share of those. So overall it is a very stress-free job and I love it.

4 thoughts on “My stress-free job”