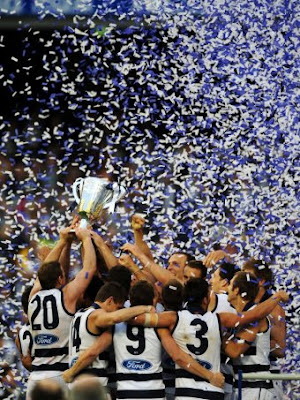 I don’t often write about my sporting interests even though I find many parallels between sport and life. Some are obvious like teamwork, others are more subtle like the role of self belief.

The football team I follow, Geelong, won the grand final again this year which is amazing. After not winning a premiership for over 40 years, Geelong has now won 3 in 5 years. At the end of last year Geelong lost a couple of key people and most weren’t expecting them to do so well this year. But sometimes key players aren’t so ‘key’ afterall. Losing a team member can create an opportunity for someone else to step up.

Another sporting highlight for me was Sam Stosur winning the US Tennis Open last month. Hope she can keep her form going for the Aussie Open.

We would prefer concrete evidence for being a Christian.