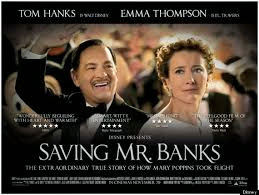 Overall I enjoyed watching the movie, Savings Mr. Banks. However as a writer I was a tiny bit sad that, despite being a “consultant” on the movie and spending time with the producers, Travers had minimal input into the movie – it is a better movie because of it but it doesn’t reflect the book as much as Travers would have liked. Disney gave the appearance of wanting her input but he effectively called her bluff. He knew sales of her books were in decline, she needed the money. This seems to be the way when a book is turned into a movie. The author signs over the rights and is left nervously wondering what Hollywood is going to do to their work.

As a movie goer I found it quite emotional watching Pamela Travers reliving her past as she participated as a “consultant”. Travers’ childhood had been quite traumatic with her alcoholic father trying to hold down a job as a bank manager and her mother suffering depression. Her story of Mary Poppins was something of a complete reversal compared to the reality of her own upbringing.

My favourite line in the movie is when Walt Disney says to Travers:
“George Banks and all he stands for will be saved. Maybe not in life, but in imagination. Because that’s what we storytellers do. We restore order with imagination. We instil hope again and again and again.”

For Travers, the story of Mary Poppins restored order and gave her hope and now, Disney was asking her to do it for others. Likewise as a writer I feel my commission from God is to instil hope again and again and again.