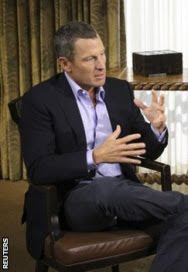 Science puts so much weight on empirical, testable, demonstrable evidence, yet it wasn’t all the scientific testing they did on Lance Armstrong that brought him undone. It was the eye witness accounts. When enough people said, “I saw Lance Armstrong taking performance enhancing drugs,” he could no longer deny it. Most of the hundreds of tests they did on Armstrong were clean and even the one or two that may have been doubtful were easily explained away. But in the end, the eye witnesses could not be silenced.

Likewise science likes to tell Christians that God can’t be real because there isn’t empirical, testable, demonstrable evidence for his existence. I have written about the topic of God and science many times, most recently here and here. The point I’d like to make now is that the eye witness accounts of Christians over the last 2,000 years makes for compelling reading. From an insignificant group of disciples came the greatest movement the world has ever seen. This movement created hospitals, schools, universities, impacted music, the arts and science. Christ followers changed the values of their societies. They taught compassion, valued humility and had respect for all people. (Incidentally this is the subject of John Ortberg’s new book, Who is this man?)

If science is going to be true to its roots and investigate all the evidence, it has to consider the eye witness accounts.