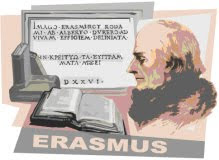 I’ve been studying church history lately and I surprised to say it is a lot more interesting than it first appeared. (See here).

Perhaps because along the way I have found some kindred spirits. Luther, for example, never wanted to leave the monastery – I totally get that. Instead he was thrust into a teaching position and birthed the reformation.

Then when I was on holidays earlier this year I bought a bag, photo here. The bag has a quote on each side. One of the quotes was: When I get a little money, I buy books; and if any is left, I buy food and clothes. The quote is by Erasmus. I have recently discovered that Erasmus was a Christian, a writer, and a scholar during the time of the reformation.

And then the other day I read this: Years later, looking back over his career, Calvin observed, “Being by nature a bit antisocial and shy, I always loved retirement and peace…But God has so whirled me around by various events that he has never let me rest anywhere, but in spite of my natural inclination, has thrust me into the limelight and made me ‘get into the game’ as they say.” *

Likewise God has made me ‘get into the game’ despite my natural inclinations.