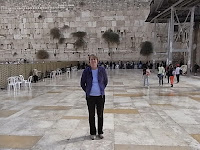 Brief history of the Temple Mount (visited yesterday and today): Abraham came here (Mount Moriah) to sacrifice his son Isaac. Solomon built the Temple on this land which his father King David purchased from Aravnah, the Jebusite. That Temple, destroyed by the Babylonian conqueror Nebuchadnezzar in 568 BC, was rebuilt 70 years later and restored to its original glory by Herod, 2000 years ago. Such was it splendour, it was said that, “he who has not seen the Temple of Herod has not seen a building of true beauty.” In 70 AD this Temple was destroyed by the Romans, burned to the ground and its stones scattered.

The Western Wall (Wailing Wall) was the retaining wall for the temple and the only part of the Temple to survive the Roman destruction. It was built to support the western side of the Temple Mount. It is the most sacred structure of the Jewish people. Its ancient stones stand testimony to a glorious Jewish past, a proud heritage and an extraordinary national rebirth. It is a focus of Jewish longing and prayer for redemption and renewal.

While praying at the wall I felt an overwhelming sense of gratitude for all God has done for me. Then later when I went back to the southern wall area I felt incredibly blessed to be in the same place that God chose for his Son to come.

We walked through the Western Wall tunnel which goes from the Wailing Wall and heads north. It was excavated after 1967 when Israel regained access to the area. We saw stones from Herod’s time, as well as cisterns and water channels which helps in knowing what the temple area looked like in Jesus’ time and later.

From there we went to the Tower of David but it’s not King David’s as it was built in Herod’s time to protect the city. It is now a museum and has lots of models of the ancient city and records 4000 years of Jerusalem’s history. 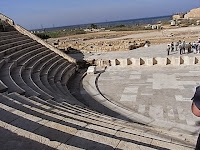 Today we travelled to Caesarea on the Mediterranean Sea. It was good to out of the city and feel the sea breeze. The number of tourists and tourist buses in Jerusalem is unbelievable.

In 30 BC Herod was awarded the small village of Straton’s Tower. He built a large port city at the site and called it Caesarea. It was a planned city, with crisscrossing roads, a temple, theatre, amphitheatre, markets and residential quarters. By the year 6 BC it had become the headquarters of the Roman government in Palestine. Caesarea served as a base for the Roman legions who dealt with the quelling of the Great Jewish Revolt. After the destruction of Jerusalem it became the most important city in the country. There are ruins from later periods as well as earlier times.

Cornelius lived at Caesarea. The Gospel slowly travelled to the Gentiles via the God fearers (Cornelius) to genuine Gentiles. The disciples struggled to include Gentiles and it wasn’t until persecution came that they eventually left Jerusalem.

Next we went to Mount Carmel – amazing views. This is the fertile part of the country so it is good to be away from the desert though there is still plenty of rocks.

Mt. Carmel -Today instead of offering children to pagan gods we abort them. Both these things are done for economic reasons. Previously it was in the misguided belief that the pagan god would bring about fertility which would lead to economic gain. These days it is women don’t want to interrupt their careers to have babies and deprive them of income. 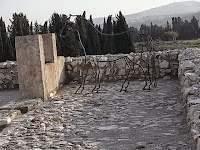 Travelling on to Megiddo which is an extensive archaeological site where they found 22 levels of civilisations, covering a number of time spans. Two stable complexes were found which attests to Megiddo’s status as a major chariot city. It is felt these date to one of the Israelite kings. Some feel there are remains from Solomon’s building efforts (and it is interesting to note that Solomon had a lot of horses 1 Kings 9:15, 1 Kings 4:25-29). Megiddo is also known as Armageddon. It is a strategic place geographically as it is the land bridge between Europe, Africa and the east, avoiding the desert and the sea and also fertile enough to feed large armies.