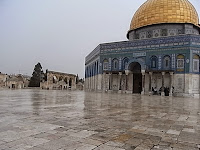 Today we went to the temple mount. Given that it was closed a couple of weeks ago it was great to be there despite the fact that it was raining. The Temple Mount is a large area. It is dominated by the Dome of the Rock but there is much space around it and much speculation as to where the Temple was actually located.

We visited the Wohl Archaeology Museum in the Herodian Quarter of the Jewish Quarter of the Old City. We walked through the remains of first century homes belonging to Jerusalem’s wealthy leaders and priests during the last days of the Second Temple period. The area contains six luxurious houses which contained artefacts from the daily lives of the owners – decorated walls, mosaics, ritual purification pools (Mikvah’s), eating utensils, household objects, coins, souvenirs, furniture and even ancient cosmetics. The priests were obviously making good money from exploiting those coming to the temple. We also went to the Burnt House Museum – Katros House where remains from 70 AD were found including evidence of the fire that ravaged the house. The House of Katros was the name of one of the four dynasties of High Priests who exploited the people and misused their position. They were known for making harsh legal rulings and for granting members of their own family positions in the Temple. 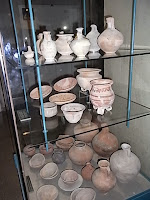 It would appear that ideological dilemmas (Zealots, Priests, Pharisees, Sadducees) and the social gaps brought on the city’s destruction. Jerusalem’s aristocracy, mainly Sadducees, agreed to compromise in regard to Roman culture on condition that the Jews would continue to enjoy religious autonomy and that Jerusalem remain the religious centre. The Pharisees, claimed that it was preferable to lose Jerusalem rather than compromise on Jewish culture and identity which according to them, was the centre of Jewish life. There were even those who claimed that Jerusalem under gentile rule was not a true Jerusalem. And therefore a “Celestial Jerusalem” must be founded someplace else-a spiritual Jerusalem where the emphasis would be on spiritual life (the Essenes). Jerusalem’s Jewish aristocracy, the wealthy inhabitants of the Upper City began to integrate into Roman culture. In contrast those opposed to the Romans lived, for the most part in the lower city. The day came when those with extreme beliefs in Jewish values and traditions, would begin physical resistance against the Romans and the Jews faithful to the empire. Was it preferable to die in a revolt for Jewish principals and freedom, or to live under political oppression? 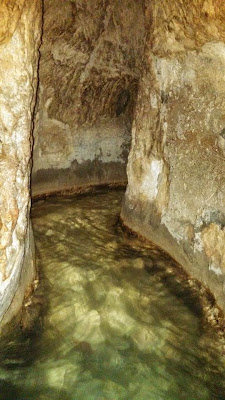 After lunch we went into the City of David and saw foundations from David’s time. Then we went through Hezekiah’s tunnel which was a lot of fun – walking though a very narrow dark tunnel with shin deep water flowing through it. So I was glad I was with a group. It is an amazing engineering feat and they are still unsure how they achieved it. The tunnel finishes at the Pool of Siloam which they only found in 2005 by accident but they haven’t been able to fully excavate it as the land is owned by the Greek Orthodox Church.

Pool of Siloam – man born blind. First reaction was to look for someone to blame. Jesus – forget about apportioning blame and let’s do something to solve the problem. 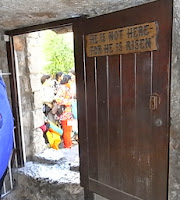 Today we had communion at the Garden Tomb which was probably not Jesus’ tomb but is more like his tomb would have been. As you walk out there is a notice which says, He is not here. He is risen, which is really meaningful to read at the site.

At the Garden Tomb I was reminded of the slave girl who Abraham Lincoln bought to set free. She said: “Well sir, if that’s the case, (that you have secured my freedom) then I choose to serve you all the days of my life.”

From there we visited a current archaeological dig and the person in charge explained various aspects of the site. Decisions have to be made about what to keep and what to excavate, which was helpful information when looking at other digs.

Next we went to the southern wall excavation which is probably where Pentecost occurred, logically you need space for 3000 people and access to water for baptisms, which there would have been because of all the Mikvah’s. This was the entrance point to the temple mount so Jesus must have walked here!

In the end Job is satisfied with God’s response; even if I am not.