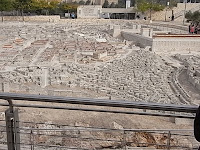 Day 5
This morning we visited three museums. First the Israeli Museum which had an enormous model of the Old City which was very helpful in understanding where things were in Jesus’ time.

Second the Shrine of the Book where they keep the Dead Sea Scrolls. The scrolls were very neatly written.

Third the Holocaust Memorial which was quite confronting. However the most amazing thing was the connection made between the loss of six millions Jews in World War II with the fact that three years later Israel was declared a nation.

In the Holocaust memorial there was no sense of blaming God or disbelieving in God but rather that out of suffering came rebirth. Their suffering had a purpose. Germany is now Israel’s biggest supporter after the US.

This afternoon we started visiting some of the sites connected with Jesus’ last week – upper room, pit where Jesus was held overnight and courtyard where Peter denied Jesus. In the 4th century when Christianity was recognized they seemed to build a church on every significant Christian site in Jerusalem. Still, it is the location that is important not the building. 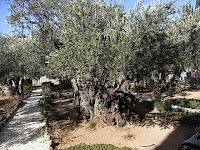 Day 6
Today the bus took us to the base of the Mount of Olives and we walked in the Kidron Valley where there are some huge tombs there carved from the cliffs. Then we went to a garden which is very probably Gethsemane. There is now a church there but it was good to be there and read the Gospel account.

Garden of Gethsemane – in a challenging situation like the one the disciples found themselves in, the human response is fight or flight. Peter’s response was to fight but the other disciples’ response was to flee. However God often wants us to stay and wait for his purposes to be revealed. The disciples were forgiven yet they learnt more godly responses through God’s enabling.

Then we went into the Old City and saw the pool of Bethsaida where Jesus healed the man who was apparently waiting for the angel to stir the water. We visited, The Church of St Anne which has very good acoustics and it is common for groups to sing. Our group sang How Great Thou Art and How Great is our God. The Canadian group after us sang, Holy Holy Holy so we stay and sang that too. It was like a foretaste of heaven to sing with Christians from other nations.

Pool of Bethsaida – was possibly by a temple to another god. People hedge their bets thinking if one god doesn’t heal me maybe another one will. God’s miracles are not like pieces of a pie. God has unlimited resources. No one else can steal my blessings or my miracles!

From there we walked the Via Dolorosa (Way of the Cross). The path Jesus walked after Pilate handed him over to be crucified. It is quite likely the path as the roads are basically in the same place as they were then. After lunch we went to the Holy Sepulchre – the place where Jesus was crucified and buried – it is unrecognisable with religious buildings all over and around it.