Day 3
Today we travelled to Tel Arad where there is an archaeological site with six levels of settlement dating from the period of the Judean Kingdom – 900 to 600 BC. The fortress area contained a temple with a Holy of Holies which is surprising since the only Holy of Holies was supposed to be in Jerusalem. Residential structures were also found. On the same site there are also remains of a Canaanite city from about 3000 BC.

Archaeology often has different chronology to Biblical history. Is this because the Bible doesn’t record history accurately? Is this because archaeological timing is inaccurate? Is it because we only have some of the information and not all? Interesting that the central stones in every house in Tel Arad are broken and suggests a deliberate act of violence perpetrated against foreign gods.

Next went to Tel Beer Shev – where there are also many layers of civilizations. They keep building on the same sites because they are on a travel route and near a water source. The first fortified city was established here in about 900 BC as one of the important administrative centres of the Kingdom of Judah. A four-horned altar was reconstructed from stones found buried in the storehouse. The fact that it has been dismantled and buried attests to a change in the kingdom’s ritual customs. This is in line with the religious reforms initiated by King Hezekiah (800 BC) according to the Bible 2 Kings 18:1-4. (The temple discovered at Tel Arad was also done away with in this reform.). A well was also found at the gate and some feel this is connected to the one mentioned in Genesis 21:27-32.

Then we visited the Australian war memorial for Light Horse Brigade in WWI. The Australian Light Horses secured the water supply at Beersheba and thus ensure victory over the Turks which lead to freeing Jerusalem and eventually paved the way for Israel to become a country again.

Arrived in Jerusalem just as it was getting dark. 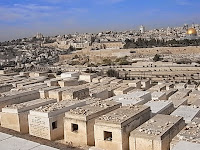 This morning we went to the Mount of Olives where there are great views of the Old City. It was emotional looking at the Old City from the Mount of Olives thinking about Jesus weeping over Jerusalem. There are churches on all the significant Christian spots so there is a church here called Dominus Flevit meaning, The Lord has wept.

There’s lots of grave stones in the Kidron Valley. This is where it is believed that Elijah had his vision of the dry bones being resurrected.

Interesting people wanted to be buried in the Kidron Valley in order to be the first to be resurrected! They spend big money to get this prime real estate to be buried here. Do they really think this is how God operates?

We then went to Herodian – another of Herod’s palaces and an important archaeological site.

From there we went to Bethlehem and the Church of the Nativity which was somewhat of an anti climax since the church has been built over the spot and looks nothing like it would have done. However we also went to the Shepherds Fields where there are caves and it felt a bit more like Jesus’ time.

When King Herod asked where the Messiah would be born the religious people of the day knew, but they did nothing because he didn’t met their expectations. Likewise God may want to do something outside our expectation.