Day 13
Today we spent the day visiting the towns around the north western side of the Sea of Galilee where Biblical events happened. We started the day with a boat ride on the Sea of Galilee from Tiberias to Ginosar. The ‘Sea’ is quite large and would be some distance if you were walking across! It is very picturesque as it is almost surrounded by hills – green and not so rocky. 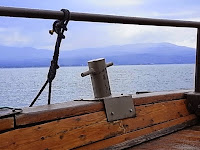 Sea of Galilee – when Peter’s boat overflowed with fish, he called James and John to share the blessing. Peter and Andrew didn’t just collect enough for themselves. Likewise we should share the blessings God gives us.

We saw the fishing boat which was discovered in 1986 on the north-west shore of the Sea of Galilee and dating from Jesus’ time. Next we visited Capernaum where they uncovered the remains of a village from the time of Jesus and possibly Peter’s house. The house had been redeveloped to accommodate group meetings – perhaps early Christian meetings? Capernaum was at an important junction geographically for trade routes.

We visited the “Bread & Fishes” church at Tabigha. Tabigha was also known as Heptapegon, “Place of the Seven Springs” and is also the spot (apparently) where Jesus reinstated Peter. At this spot hot springs enter the water so at the time of the resurrection this was the most likely place for the disciples to have gone fishing.

Sea of Galilee shore – Jesus reinstates Peter. Failure isn’t final. Jesus not only forgives but also restores. Likewise we can be restored regardless of how we lost what God has given us. 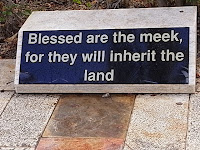 Nearby is the likely spot of the Sermon on the Mount where there is also a church – The Church of the Beatitudes which has very nice landscaped gardens.

Mount of Beatitudes – bless meaning to kneel thus not a passive thing but active as we cultivate these attitudes.

Day 14
We started the day by visiting a baptismal site, unlikely to be the one where John baptised Jesus but one that is convenient. Many in the group ‘rededicated’ their baptisms. It was a very encouraging time. 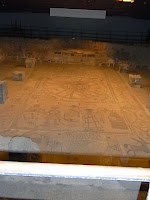 We then went to Bet Alpha where they found a 6th century synagogue with one of the most beautiful mosaics discovered in Israel. The central section of the mosaic contains a zodiac with the symbols of the months. In the centre is the sun god Helios riding in a chariot drawn by four horses. In the four corners are figures of women, symbolizing the four seasons of the year. By the time this zodiac was laid, idol worship had lost its hold so we hope the zodiac was only for decorative purposes. These types of designs are not found in 1st century synagogues as previously they were very particular about not having ‘graven images’, which meant no depictions of people or animals.

Next we went to Bet She’an. The Israelites tribes had not succeeded in conquering Canaanite Bet She’an and after the battle waged at Mt. Gilboa, the injured Saul killed himself. The Philistines displayed the bodies of Saul and his sons on the city walls. The city was later taken by King David. In Jesus’ time Bet She’an was one of the ten cities of the Decapolis. The city was destroyed by an earthquake in 749 AD and not rebuilt.

Bet She’an – where Saul died but David refused to celebrate his death but continued to honour him and his son. Even with bad leaders we still need to do the right thing. 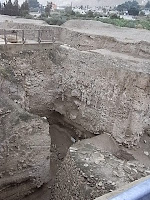 On to Jericho and the remains of a city wall which is dated prior to Joshua’s time. However it is possible they may have built on top of the original wall with mud bricks which have not survived. Jericho claims to be the oldest (fortified) city in the world. It is in the desert but has some natural springs which makes it an oasis.

We stopped and looked at the only sycamore tree in Jericho. It is very old maybe Zacchaeus climbed it!

The following morning we travelled back to Amman in Jordan to catch our flight home.

An amazing two weeks of reflecting on Biblical events and spiritual insights.

If you have missed any of the previous entries, click here to go back to Day 1 & 2.

Joshua 11-15 Previous
Book Review : Your Church is Too Safe Next