Day 11
First up today we went to the mount in Nazareth where they tried to throw Jesus off (Luke 4:29). Whether it was the actual site is debatable but there was a great view! 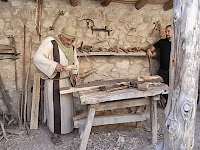 In Jesus’ time Nazareth was only a small village of maybe 400-800 people. We visited a church which has been built around the remains of a house from Jesus’ time but the highlight was visiting Nazareth Village. It is a recreation of Nazareth as Jesus would have known it. When they were preparing the site they found a wine press and other indications of village life from Jesus’ time which makes it more authentic. They have restored the terraced vineyards and recreated a synagogue, carpenter’s shop, weaver’s room and kitchen.

Jesus preached in the synagogue at Nazareth saying today this scripture is fulfilled in your hearing (Luke 4:21). Jesus stood and announced his anointing to his family and friends. Then he sat down without justifying or rationalizing his position.

They explained how the wine press worked. The whole community was involved in pressing the grapes. No doubt Jesus was too. Jesus would have also been familiar with an olive press. They had one there with a real donkey.

Gethsemane means oil press – The olives are crushed three times once for the Virgin oil for the temple, secondly for food and thirdly for fuel for light. Jesus was ‘crushed’ three times and became the light of the world. 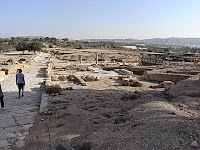 Then we went to Zippori which is only 4-5 miles from Nazareth but not mentioned in the NT even though it was a Jewish town. There are ruins of a magnificent city including a system of streets, public buildings, dwellings, a central market, bathhouses, a theatre a synagogue and churches mainly dating from the Roman and Byzantine periods. There are also many mosaics including one in the synagogue with zodiac symbols but there is a better example at Bet Alpha. The theatre was built in Zippori at the end of the 1st century AD so it was not there in Jesus’ time. However there was a lot of other building going on. Since it is felt Jesus was more of a builder than just a carpenter, he possibly worked here. Maybe the people of Zippori were part of the crowds that came out to hear Jesus. 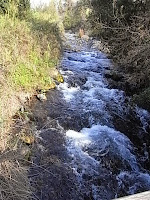 Today we went to Dan, which is in the very north of Israel so we were close to Lebanon’s border, near the Golan Heights area and an important defence area for Israel. The Dan River is an important source of the Jordan River which makes it very picturesque unlike most of the other archaeological sites.

On the way we stopped at Magdala, birth place of Mary Magdalene. There are the remains of a settlement which is interesting because it is just one layer compared to the 22 at Megiddo. It was first built in the 1st century and not built over when the Romans left.

At Dan we saw the remains of the temple that was built following the split in the kingdom after the death of Solomon. Jeroboam the King of Israel built a temple so the people would not have to go to the temple in Jerusalem. Prior to this the area had been the Canaanite city of Laish which was captured by the tribe of Dan since they had found it difficult to deal with the Philistines and headed north (Judges 18:27-29). Archaeologists found a very small piece of a fossilized tablet from the 900 BC in this area which bears an inscription mentioning the house of David. This is the first time that the words, “house of David” have been discovered outside of the Bible. 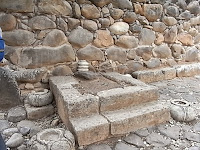 There are also the remains of the city gates from this time where there is a bench, on which the elders of the city once sat. Plus there is also a Canaanite gate dating from 1800 BC which is 7 meters high. It is a remarkable discovery as the gate is completely intact. Its arch-shaped lintel is one of the earliest complete arches found in the world and one of the only ones still standing.

We then visited the Hermon Stream Nature Reserve Banias which we know as Caesarea Philippi. The Hermon Spring emerges at the foot of Mount Hermon. After the conquest of Alexander the Greek in 332 BC the temple of Pan was constructed at the foot of high cliff. The cliff was apparently the back wall of a giant cave, whose roof collapsed and created rock terraces on which the temples and the ritual courtyards dedicated to Pan were constructed. While the initial temple was built in Greek times the site continued to develop throughout the Roman period. Following Herod’s death, Philip called it Caesarea Philippi.

Caesar Phillipa – against this back drop of worship to idols Jesus asked the disciples: who do you say that I am? On this confession God builds his church. It comes by revelation not information. 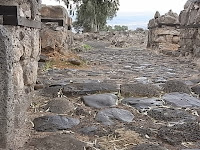 On the way back to Tiberias we stopped at Bethsaida which was a fishing village located on the shores of the Sea of Galilee where the Jordan River enters the sea. An earthquake moved the Jordan River so the site is no longer on the Sea of Galilee which confused archaeologists for some time. Bethsaida is one of the most frequently mentioned towns in the New Testament – the birthplace of the apostles Peter and Andrew; the home of the apostle Philip; the site of the feeding of the multitudes; healing of the blind man and near its shores Jesus was seen walking on the water.