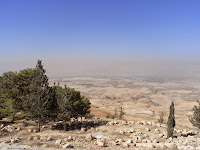 My trip to Israel was part of a group tour organized by Harvest Bible College. It was a study tour and a subject for my Bachelor in Christian Ministry. Some of the historic information in these posts comes from brochures given to us at the sites. The paragraphs in italics are some spiritual reflections – some mine, some the tour leaders, and some from other group members.

We flew to Amman in Jordan and our first stop was Mt. Nebo which I found disappointing. It was hazy which is apparently normal due to sand from the desert so not a great view. I also suspect it was much greener and perhaps less rocky when Moses saw it (?)

Moses saw the promise but did not enter it however he paved the way so Joshua could. Sometimes our role is to pave the way for others.

From Mt. Nebo we went to the Allenby Bridge to cross into Israel which took some time. From there we went to Qumran which was where the Dead Sea Scrolls were found. It was where the Essenes lived in Jesus’ time. In 68 AD during the Great Jewish revolt, the Romans conquered Qumran and dispersed the sect. A Roman garrison was then stationed at Qumran but when this was relocated, the site was abandoned.

The Essenes saw that the priesthood had become more political than spiritual and isolated themselves at Qumran. They made their community secretive, and difficult for others to join or leave. This is not Christ like or the model of the early church. In times of difficulties isolation is not the answer. 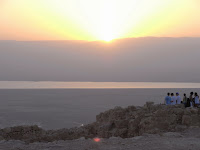 This morning saw the sun rise over the Dead Sea after an exhausting walk up Masada (caught the cable car on return).

Masada is a historic site rather than a Biblical site. Herod (37 BC to 4 AD) built palaces on Masada as his winter retreat. There may have been a settlement prior to this but no remains have confirmed this. In 66 AD at the start of the Great Jewish Revolt a group of Zealots captured Masada. Over the next 4 years they were joined by fleeing Jews. They lived there for a further 3 or 4 years until the Roman siege in 73 or 74 AD. When they realized that defeat was inevitable they made a pact to kill each other as they considered death preferable to slavery.

At Masada we see an example of Jewish thinking. Another example is the Jewish perspective of Abraham’s sacrifice of Isaac. They note Abraham’s willingness not whether or not he actually sacrifice his son. As Christians we are called to sacrifice our life choices in order to follow God’s choices for our life. Romans 12:1

From Masada we went to En Gadi where David hid from Saul in about 1000 BC. No archaeological findings support this. However it is a good place hide with lots of caves and a water spring.

At En Gadi David could have killed Saul but David did not push his claim to the throne rather he let God bring it about in his own time. We have to give grace to our leaders as God deals with them in his timing. Our responsibility is to be the person God wants us to be.

After lunch we went for a swim in the Dead Sea which was good fun. It is really strange once you lie down it is actually hard to push your feet down as it is so buoyant.