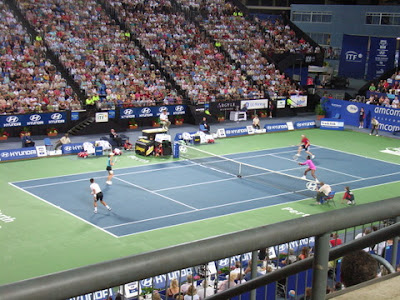 I took this photo during the deciding mixed doubles final with Serena Williams and Marty Fish at the far end playing Jelena Jankoviv and Novak Djokovic from Serbia.

I enjoyed the tennis at the Hopman Cup although the final was a bit of an anti climax as the Serbian team were somewhat restricted by injuries but put up a good fight nonetheless. There are plans to build a new stadium for this tournament modelled on the one they use at the Australian Open as the Hopman Cup is one of the lead up event for the Open. The new stadium will be much bigger and have a retractable roof. The reason I was keen to go to this tournament is that it is played under cover (since it is the middle of summer here) and it is a small event. (For the sake of comparison at the final of the Hopman Cup there were about 8,000 people, other matches were about half this, except for when the Australians were playing. On the first night session of the Australian Open the crowd was 14,000 – did I mention I don’t like crowds!) So by building this new stadium they will effective eliminate the main reasons for me wanting to go! So I’m glad I went this year, I probably won’t go again. I saw some well known players as well as some “lesser lights”. There were some really good matches even though it was the first outing of the season for many of the players.

The Australian Open is now on. However I will try to spend some time around here catching up on everyone’s news and not spend all of my free time watching TV!

We can live guilt-free.