God has his eye on us 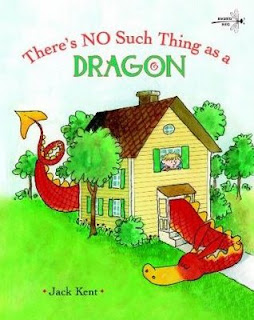 This week at work, I had the opportunity of telling one of my favourite stories, There’s no such thing as a dragon by Jack Kent. It was written in 1975 but I believe it has been republished. It’s a great story and the pictures are terrific too.

The story begins with Billy waking up one morning to find a small dragon on the end of his bed. His mother insists there is no such thing as a dragon and proceeds to ignore it. But the more Billy and his mother ignore the dragon the bigger it gets, until it chases a bakery truck down the road taking the house with it. After that the dragon can no longer be ignored and it shrinks down to its original size. The story finishes with a great line. When Billy’s mother asks why the dragon grew so big, Billy replies: I’m not sure, but I think it just wanted to be noticed.

This is easily applied to children who misbehave simply to gain attention but I wonder if adults do it too?

Some people act smarter/dumber than they are; poorer/richer than they are; or simply more helpless than they are, in order to gain attention. Yet if we are Christians we are growing in our understanding of God’s acceptance of us and even when others ignore us we know that God still has his eye on us.

4 thoughts on “God has his eye on us”

The Heidelberg Catechism re: faith alone Previous
1 Corinthians 15 Next