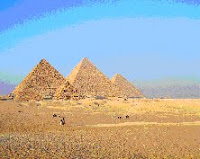 On Sunday I preached a sermon at church which was a bit of first for me. The following is a summary of what I said:

There are the four geographical locations mentioned in the Old Testament where the Israelites spent significant amounts of time:

I shared a few thoughts about each place:

Egypt
The Israelites went to Egypt when Joseph was in charge and there was a famine in Canaan. They had gone voluntarily and Joseph had promised to provide for them. However Joseph knew Egypt was not going to be the permanent home for the Israelites. Joseph knew that one day God would arrange for his people to return and when that day came, Joseph wanted them to take his bones back to Canaan. This is pretty surprising because Joseph only lived in Canaan for the first 16 years of his life; he spent most of his life in Egypt. Yet he knew that Canaan was his real home.

So how do we leave Egypt?
It is recorded in Exodus 2:23 – The Israelites groaned in their slavery and cried out, and their cry for help, because of their slavery went up to God.

So firstly they cried out to God. We too need to cry out to God. We need to acknowledge that on our own we can never do enough. Secondly on the night of their deliverance the Israelites were to take the blood of a lamb and put it on the sides and tops of the doorframes of their houses. It is a picture of what God for us. By Jesus sacrifice and only by his sacrifice we become holy and righteous in God sight.

The Wilderness
In order to get to Canaan it is necessary to go through the wilderness but we are not supposed to stay there. In Deuteronomy 1:2 we discover that it takes eleven days to go from Horeb to Kadesh Barnea. However the Israelites ended up spending 40 years in the wilderness…40 years to make an 11 day trip.

They sound like a very obedient people. When the cloud moved they moved. When it stayed, they stayed. These people seem quite different to the ones who refused to enter the Promised Land. Yet they had an ulterior motive. The cloud provided protection from the sun during the day and provided warmth during the night. So there was a very good incentive to pack up and move when the cloud moved.

In the long term this is not what God really wanted. It was a mere shadow of how he really wanted to guide his people. Ultimately he didn’t want people who were motivated by their own comfort, by their need of shade or warmth. He wanted people who would follow him because they trusted him, because they loved him, because they believe in his good intentions. God wants people who will willingly follow his plans for their lives knowing that God’s plans probably won’t bring the most comfort but nevertheless believing they are the best plans for their lives.

The most prominent emotion of living the wilderness is immaturity. It’s expecting God to send a cloud or some sort of visible sign to comfort me and direct me. It’s living by what I see God doing and not by faith.

How do we leave the wilderness?
We grow up. We fed ourselves which means we read the Bible regularly. We pray. We come to church not because of what we get out it but we come with the intention of blessing God and blessing others. We remember it is not about us but rather that it is all about Jesus.

Coming up next: Babylon and Canaan