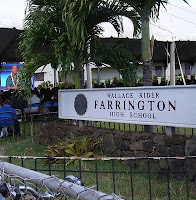 As I said the conference is designed to express what is important to the leadership of New Hope, and also what is not important. Wayne Corderio made the comment that the church has been homeless for 16 years. So obviously having a building is not a priority for them. They do own offices and a chapel on Sand Island in Honolulu but mostly their services are held in rented premises—in a place like Honolulu there would be no shortage of places to rent. However while they don’t spend money on buildings they do spend money on technology in the belief that they need to be relevant.

I like chocolate but there is no point using chocolate as bait for fish. If you want to catch fish you have to use the bait that fish like. Likewise as fishers of men we have to present the gospel in ways that are relevant to the current generation and that’s what they do at New Hope. The lights, screens and special effects were impressive. Yet, it is not just about the visual appeal, it is also about teaching young people technological skills that are useful not only in church but also in the world.

The photo is one I took as I was arriving for the 11am service. I was early and the 9am service was just finishing. On the left of the photo you can see the overflow tent with Wayne Corderio being broadcast onto a big screen.