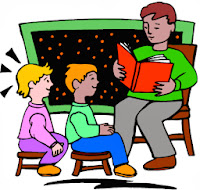 I have been studying children’s ministry as part of my course and I thought I would share some of my discoveries:

From a Biblical perspective, parents are seen as the primary source of spiritual teaching. However the mode of teaching them was based on the premise that children would be spending most of their time with their parents.

“Teach them to your children, talking about them when you sit at home and when you walk along the road, when you lie down and when you get up. Write them on the doorframes of your houses and on your gates” (Deuteronomy 11:19-20 NIV).

Consequently for at least the first 1700 years of the Christian Church there was no specific ministry to children – no children’s pastors, family ministers or youth workers. There are some parents who have returned to this model. They want to be fully responsible for the spiritual teaching of their children and do not encourage their children to attend Kids Church or youth group. Some have gone to the extent of only attending church spasmodically preferring instead to have “home church” with their family. However this exaggerates the Biblical model. Though parents were the primary source of spiritual instruction, children grew up with their extended families of grandparents, aunts, uncles, cousins etc. The children were receiving role modelling from a variety of people. By returning to this model in the context of nuclear families depraves children of the diversity that a church family provides.

Around the time of the Industrial Revolution formal Sunday Schools began. Rather than children working alongside their parents on farms or in cottage industries, they were working six days a week in factories and not receiving any instruction – spiritual or otherwise, apart from the wealthy. Most children were not learning to read and write. The Sunday School movement was started to meet the need for literacy and for spiritual instruction.

Initially the movement attracted large numbers of children but over time with social conditions improving for children and, with the introduction of formal education, Sunday School attendances steadily decreased. Many attempts have been made to address this decline and the introduction of more entertaining programs is one of these attempts. However entertainment alone is not stopping this trend and many churches are finding children’s attendance at Sunday School sporadic.

Nevertheless some churches in recent times have found that a children’s program can still be popular and an effective means of outreach to children but the program needs to be more than entertainment.