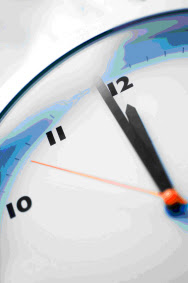 Further to my last post, the second challenging thought I read on Carey Nieuwhof’s blog was where Carey quoted from a story he had heard and said, “30 seconds of you being uncomfortable could change someone’s eternity.” He was referring to a story where someone had invited a friend to church who then invited another person so that after a couple of years 12 people’s lives were impacted with the gospel. We tend to think that inviting someone to a Christian event is a huge, scary thing to do when in reality all it is, is 30 seconds of being uncomfortable.

It is a trick of the devil to make things seem much worse than they are and it is a trick he has been using for a long time. In Numbers we read the story of the 12 spies who go into Canaan to spy out the land. This is part of the report that 10 of the spies brought back: “All the people we saw there are of great size…We seemed like grasshoppers in our own eyes, and we looked the same to them” (Numbers 13:32-33). These people were so big that the Israelite spies looked like grasshoppers…really? Some serious exaggerating was going on here. When we are confronted with a potentially frightening event we tend to focus on the situation and in our minds it becomes bigger and more intimidating then it actually is. Whereas if we focus on God and his amazing power and grace we would more accurately access the real danger and realizes that maybe it is really only 30 seconds of being uncomfortable.

Satan is the proverbial “fly on the wall.”