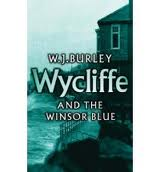 I read this book during my time in Sydney. (It was actually my Mum’s library book!)

Burley in his book, Wycliffe and the Winsor Blue, has developed an interesting plot around the idea of a joke going too far and what happens if you have no one to share the joke with. After all a joke is only funny when it is shared with another.

The story is set in Cornwell and begins with the death of an elderly painter from an apparent heart attack. On the evening of the funeral his son is murdered. It is not immediately obvious whether these two events are connected. As the investigation proceeds more suspects emerge but none with an obvious motive. The painter’s will supplies some clues but it seems to only point towards some harmless fun. However it is in the final pages, as per all good mysteries, the pieces fall into place and the murderer is revealed.

I don’t read many books in the crime genre and this is the first I have read by Burley. I found it a pleasant change from the weighty non-fiction that I have been reading of late. Several of the clues I was able to figure out and I even guessed the murderer before they were revealed! However this only added to my enjoyment of this entertaining and well written story.