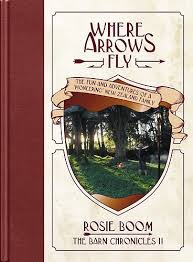 Where arrows fly by Rosie Boom is an enjoyable story of the adventures of a family who live in a barn while building a house on their farm. It is the second in the series. The first book, Where lions roar, is about their move to the farm which I have not read. There were only a couple of times that I was aware this was a sequel.

There are six children in the family ranging in ages from 8 to 18 plus their Mum and Dad, though it often focuses on 11 year old Milly. The growing number of animals on the farm horses, cows, sheep, dogs, mice, chicken, and ducks adds to the frivolity.

The book has the sense of authenticity as it is written about Rosie Boom’s real family who live on the north island of New Zealand. Since Rosie and her husband are Christians and I expected the book to include a more spiritual outlook on their life, but this was not the case. I guess Rosie wanted to attract a wider audience.

Overall a good read and recommended for primary school children.