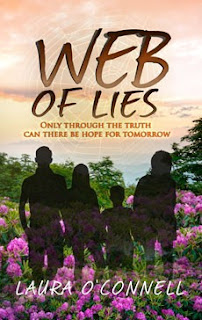 Web of lies is being featured on the Australian Christian Readers Blog Alliance this week. More information about the author and the book can be found here.

The well apt title of Web of lies describes the way deceit has silently crept into a number of relationships in this story. Lachlan and Stephanie had formed a relationship during high school but circumstances and family lies had pulled them apart with Stephanie left to deal with being pregnant and a sick guardian aunt. Eight years later, Lachlan decides to reconnect with Stephanie.

I liked the gradual process of untangling the lies and finding truth. I felt the characters dealt with their pain and confusion in realistic ways. It was not an overtly Christian story but just enough to give hope.

There were a number of minor glitches. I couldn’t figure out the time span. It felt like the story took place over a few weeks but this didn’t account for Stephanie, who lived in Sydney, being on the Gold Coast so often, and where did she stay? No explanation was given as to how Lachlan was able to find Stephanie in Sydney, especially as she had married and changed her name. I found all the characters very believable, except eight year old Ryan. He had been brought up in a semi-dysfunctional home yet was practically a perfect child. Also the story did leave some loose ends. One is only left to assume that Stephanie leaves her job and moves to the Gold Coast.

Despite these minor issues, overall I did enjoy Laura O’Connell’s story and felt content that the major dilemmas in the story were satisfactorily resolved.

Thanks to Even Before Publishing for providing a free book for review.

Ants persevere and consistently do the little things well.