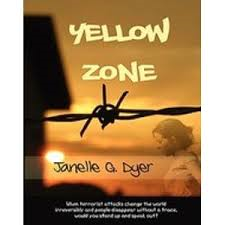 The Yellow Zone is an eerie book. Janelle Dyer has created a scenario of what the end of the world may be like, using modern technology and the terrorist threat. The story and the characters are all very believable and thus quite scary.

The story centres on a several teenagers and their families, who are caught up in the dramas and many come to a place of belief in God through the situation. The Christian element is significant but not overwhelming. In this regard at the start of the story, the reader is rather wisely left to draw their own conclusions about the disappearance of children and many people, who were obviously strong Christians.

There was a little too much ‘telling’ and not enough ‘showing’ which created distance between the reader and really connecting with the story but, for me, this added to the feeling of eeriness but perhaps there are better ways to do this.

The book encourages the reader to think about the risks involved in standing up for what you believe in. It would be suitable for teenagers who are not daunted by the terrorist threat. The story lends itself to a sequel and even a prequel.