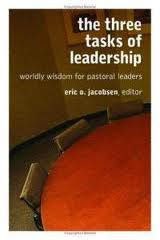 The three tasks of leadership is a collection of essays edited by Eric Jacobsen and based on this Max De Pree quote: “The first responsibility of a leader is to define reality. The last is to say thank you. In between the two, the leader must become a servant and a debtor.”

The book is divided into the three parts mentioned in this quote: Defining reality; servanthood; and saying thanks.

I struggled with the first part, defining reality. It seems an odd phrase to me but the essays in this section were basically looking at the role of leadership in the life of a pastor. The essays covered: needing grace, the pastor as CEO or as a shepherd; the influence of culture; church organizational structure; and the role of preaching.

The second part which covered servanthood I found very helpful. The writers in this section wrote about how they understood servanthood and what it means to serve others in a Christian context. The essays also touched on the importance of the pastor’s own spiritual growth and gaining wisdom from others.

The third part on gratitude I particularly enjoyed as it provided much encouragement to show gratitude at all times simply as a response to what God has done for us. The essays also covered showing gratitude by focussing on what is going well at church and to be intentional about showing gratitude especially to those who commit much time and effort to church activities.

Overall I found this collection of essays brought useful insights and differing perspectives on pastoral leadership in a modern context.

4 thoughts on “Book Review : The three tasks of leadership”