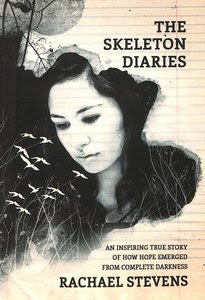 The Skeleton Diaries : an inspiring true story of how hope emerged from complete darkness by Rachael Stevens is compiled from diaries that Rachael kept after she was diagnosed with Anorexia. The book focuses on the three month period when her weight was at its lowest and most dangerous. Rachael has edited and added additional insights to the original diary entries.

I found this to be a remarkable book. Early in the book Rachael asks the question: how can you fight a monster when you don’t even know what it looks like? Yet by the end of the book Rachael has painted a very clear picture of what the monster, called Anorexia, looks like. It’s a different picture to the one I expected. Mostly it is not about food but about three strong negative emotions fear, anxiety and anger. To overcome these Rachael survives by maintaining control in the only area where she feels like she has choices – eating.

It was disappointing to read some of the reactions to her condition from health professionals. It seems even in 2007 there was little understanding of this condition. I hope things have improved since then.

I was hoping the book would also contain diary entries from her recovery. However that was a long journey which was made up of a million small daily decisions, none of which were significant in themselves. The seeds of her recovery are found in the latter stage of her stay in hospital and Rachael has outlined this further in the chapter, Steps to Recovery.

This book would benefit anyone who knows someone suffering from Anorexia. It provides important insights into the tortured mind of someone with this condition.