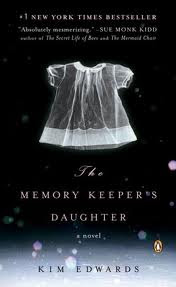 I finished reading this book over two weeks ago so it has taken me a little longer than expected to write this. The particular copy of the book that I read had a section at the back containing an interview with the author, Kim Edwards. Interestingly enough this story was based on a real event, though in reality the wife gave birth to twin boys, rather than a girl and a boy, and one of the boys had Down’s syndrome.

The Memory Keeper’s Daughter begins during a snow storm which prevents a doctor from getting his wife to hospital to deliver their twin babies. The doctor delivers the babies himself with the help of his nurse. The first baby is a healthy boy but the second is a girl with Down’s syndrome. He gives this baby to his nurse to take to an institution. When the nurse sees the conditions these people live in at the institution she is unable to leave the baby there and makes the decision to keep her. The rest of the book follows the lives of these two children for the next 25 years. The doctor is plagued by his decision which has repercussions for his marriage and his relationship with his son. Meanwhile his daughter is happy, well-cared for, and loved.

This is a well written story, although with just a tad too much description for me, (more about this here) but it was easy to ‘see’ the events as they unfolded. At a deeper level it makes me wonder how many people are living with regrets? Not many people will have given away their child but nevertheless I am sure there are many who are plagued with guilt over bad decisions, momentary lapses in moral behaviour, or unwise words said in anger. The book made me thankful that as a Christian I don’t have to live with guilt.