Book Review : The life and times of the thunderbolt kid 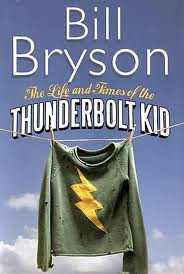 Bill Bryson obviously believes in the old adage, “don’t spoil a good story with the facts”! Bryson is a great storyteller and “The life and times of the thunderbolt kid” (Doubleday, 2006) is full of supposedly biographical stories from his childhood. If half of the stories were accurate he and his friends would be in jail! However these stories are riotously funny – though sometimes rude and the language is unnecessary distasteful at times. In fact I wonder why Bryson resorts to bad language when he can tell such a funny story without it. He has a knack of being able to create a tone in his story which makes something absurd sound perfectly normal and therein lies the secret to his humour.

On a more serious note Bryson does include some historical material about America in the 1950’s. This gives context to his childhood adventures, as well as highlighting some parts of American history that most would like to forget. In some ways Bryson’s book is a stinging attack on American greed and racial prejudice interspersed with comic relief. Perhaps in line with the idea that a “spoonful of sugar helps the medicine go down”. It was rather odd to discover that both this book and the previous book I read, “A Fine Balance” tell of incidents where people had tried to exercise their right to vote and were killed because of it. Yet these two books probably had nothing else in common, except that I read them both as part of my library’s book club.

Overall, The life and times of the thunderbolt kid was an enjoyable read.