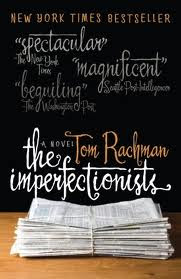 The Imperfectionists by Tom Rachman was set around a newspaper publishing company that printed English news in Rome. The company traded for 50 years before financial difficulties finally closed its doors. Each of the eleven chapters is a separate story about one of the characters that worked for the newspaper but not necessarily at the same time. The chapters overlap as characters from one story pop up in another and the various stories interweave in an engaging way. At the end of each chapter is the history of how the business started plus the highs and lows which create a backdrop to the individual stories. Tom Rachman has cleverly arranged this story and managed to tie up all the threads into a plausible ending.

The characters who worked for the newspaper are an unusual group and the only thing they seem to have in common is their inability to maintain a long term relationship with someone of the opposite sex. Rachman portraits them well, though it is difficult at times to believe that they could all work for the one employer. However being a time span of 50 years makes this more realistic.

Overall this was an interesting tale with many twists and unexpected turns along the way.