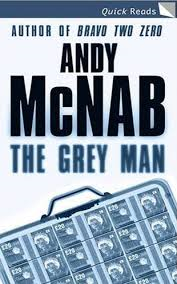 It was a refreshing change to read a story about a happily married couple in the Grey Man by Andy McNab. Kevin and Linda Dodds live a content but routine life in England. Kevin is the deputy manager of a bank branch while his wife works in a Specsavers store.

Kevin is “the grey man” – unremarkable, unnoticed, uninspired but one day he decides he has had enough of being put down by his boss and others. He initiates a plan to rob the bank where he works.

McNab manages to create a surprising amount of suspense in this short book which is part of the Quick Reads series. He quickly establishes the characters and creates a believable scenario which leads you to wonder how the situation is going to be resolved.

It is a satisfying, enjoyable tale, even though it does glorify robbery.