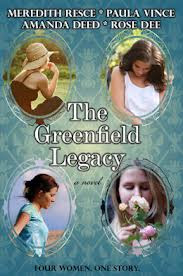 The Greenfield Legacy has been featured on the Australian Christian Readers Blog Alliance. Information about the authors and more details about the book can be found here.

The Greenfield Legacy (Even Before Publishing, 2012) is the fictional account of four women who were all impacted by the decision, made by one of them, to give up a baby for adoption. This decision haunts each of them in different ways, sometimes unknowingly.

Each woman’s point of view is written by a different author: Meredith Resce, Paula Vince, Amanda Deed and Rose Dee. I thought this might make the story disjoined but it doesn’t. The story flows so well, I would never have guessed it had four authors.

The story explores some powerful issues: how unforgiveness poisons relationships, how easy it is to assume the worse of people, why trying to please others is doomed, how a problem in one generation can repeat itself in the next, and how little we sometimes understand those we live with. These issues were handled skilfully and resolved well.

It was unusual to have four main characters so fully developed in a relatively short novel and I suspect that this is the bonus of having four authors. There were also a large number of other characters in the story, perhaps another consequence of four authors? However I was pleased to find a character list at the back of the book which helped me keep track of them.

Overall I enjoyed the story very much and loved the Australian context. A good read.

I was fortunate to read a pre-release copy of the book as it is not due for release until 1st November. Check out: the book trailer.