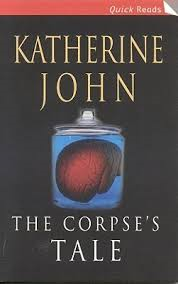 The Corpse’s Tale by Katherine John was an excellent mystery in the quick Reads series. It tells the story of a disabled man, David Morgan who was charged with the murder of Anna Harris – a young, attractive drama student. Ten years later David is released from prison still protesting his innocence.

Sergeant Trevor Joseph and his team reopen the case to discover new evidence and wonder why this was not uncovered at the time of David’s arrest.

The author, Katherine John does a great job of leaving all the necessary clues to solve this murder throughout the book. However I still did not realize who the real murderer was until the end. It is a very well constructed story.