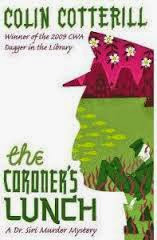 The Coroner’s Lunch by Colin Cotterill is the first in the series of Dr. Siri mysteries and introduces the unconventional doctor. This story is set in Laos in 1976 against a backdrop of the recent communist take over.

Dr. Siri is appointed the State Coroner, not because of his expertise, but due to the lack of any other qualified personnel. Dr Siri is also not qualified to be a coroner but makes up for his lack of knowledge by consulting text books and anecdotal evidence which is often difficult to come by.

I was enjoying the story until it took an unwarranted detour into the occult world of a remote village, the village where Dr. Siri grew up. I don’t mind the odd strange dream, or the bizarre behaviour of the neighbour’s dog but it feels like “cheating” when an author has supernatural phenomenon leaving clues.

Nevertheless the characters were well drawn and the murder(s) intriguing.