Book Review : The Cleverness of Ladies 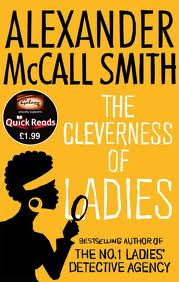 The title and picture on the front of The cleverness of ladies by Alexander McCall Smith suggested the book was going to be more stories from the No.1 Ladies Detective Agency. However I was disappointed that only the first of the five short stories was about the Agency. All the stories were well written and interesting tales but I found the middle three all failed to capitalize on good beginnings.

The first story about Mme Ramotswe’s detective agency was an enjoyable tale based on a simple idea but well executed. The second about a couple opening a successful hotel is rather implausible given the wife’s abrasive attitude. The third story about an Italian shopkeeper Fabrizia seemed rather pointless. The fourth story about disappearing wives and a cousin was unfathomable. Were they murdered by the Captain? However I did like the last story – Music helps with its subtle message of hope.

This book is part of the series, Quick Reads. Perhaps this format doesn’t suit Alexander McCall Smith as small word limits are restrictive; nevertheless it was still apparent that he is a good storyteller.