Book Review : The Case for Grace 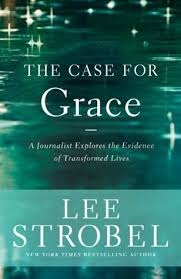 Lee Strobel is better known for writing apologetic books and his other titles, “The Case for …” are based on historical and scientific evidence. The Case for Grace is a series of testimonies, including his own, which show how God has transformed people’s lives. There is also an extensive discussion guide at the back of the book.

It’s natural when putting a book like this together that you would choose people whose lives have been radically impacted by God’s grace: An abandoned child who experienced much abuse becomes a conduit for grace, an addict who becomes a pastor of a large church, an agnostic scientist becomes a professor at an evangelical university, a terrorist and executioner starts a church, a pastor commits adultery but saves his marriage and others, a pastor’s son highly involved in the nightclub culture becomes an evangelist.

These are huge turn arounds and only possible because of God. Through the book Strobel is making the point that God’s grace can reach anyone, no matter what they have done or how far from God they seem to be. Together they provide compelling evidence for the legitimacy of Christian faith.

Lee Strobel is an excellent writer, so this is an easy to read book. It is also a brave book as he shares his own struggles with his father.