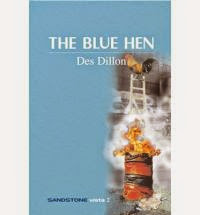 Des Dillon captures the hopelessness and despair of the long term unemployed in his short book, The Blue Hen. The book portrays the effects of continuing unemployment in a small village near Glasgow and the resulting downward spiral into drug abuse, alcoholism and depression.

The story focuses on two men, John and his friend who is not named. The story is told from the point of view of the unnamed friend. John and his friend were employed at a local factory which produced steel tubes for gas pipes. They spent months expecting the factory to close yet when it does they, and their work mates, are unprepared for the ongoing ramifications. Many are left unemployed with few prospects for obtaining regular work again. Too many idle people cause numerous social problems. John and his friend attempt several schemes to earn money but all are thwarted by lack of knowledge, lack of skill or by being sabotaged by former work mates.

Des Dillon does an excellent job in capturing the frustration and dejection of the perpetual jobless.

This book is part of the Quick Reads series and is an insightful read.

Journal of my trip to Israel – Day 1 & 2 Previous
Devotional Thought : Micah 4:2 Next

Note well: Grace is supplied on demand, not in advance.