Home | Blog | Book Review : The Art of Racing in the Rain

Book Review : The Art of Racing in the Rain 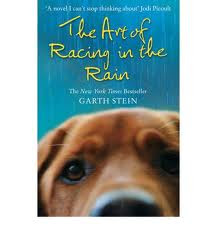 Garth Stein cleverly writes, The Art of Racing in the Rain, from the point of view of the main character’s pet dog, Enzo, who he believes he will be reincarnated as a person in his next life. His current incarnation as a dog is, apparently, training ground for being human. It is a rather amusing scenario which gives the author plenty of scope to present his story.

The story itself is rather sad. From the beginning we realize that Danny’s wife is going to die. We are less prepared for the ensuing battle for custody of Danny’s daughter with his in-laws. The backdrop for the story is that Danny is a skilled racing car driver and is particularly good at racing in the rain – hence the title.

Enzo is used by the author to draw out parallels between life and racing a car in the rain. The skills that Danny has learnt on the race track must now serve him as he deals with the death of his wife and the possible loss of custody of his daughter.

I enjoyed the author’s novel approach to telling this story and the clever ways he attributed human reactions and emotions to Enzo, as well as the way he dealt with information that Enzo couldn’t know.