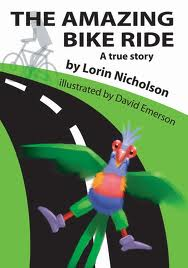 Lorin Nicholson is the author of, The amazing bike ride (Wombat Books, 2010). It is the true story of a bike ride Lorin went on as a child and is written for primary school children.

Lorin suffers from an eye condition which means at the time of the ride he only had 10% vision. David Emerson, the illustrator, has done a great job of drawing blurry pictures to replicate what Lorin could actually see on his trip.

Despite his handicap Lorin completed the long distance bike ride from his home to the beach. Ignoring the disbelief of his friends, but with the encouragement of his father, it took him two and half day to arrive at his destination. The story shows not only the difficulties he encountered but also his determination which was eventually rewarded.

The book contains a strong motivational message to encourage children not to be held back by handicaps or by peer pressure but to actively pursue their dreams.

There is a brief biography at the back of the book which tells us that Lorin completed school, trained as remedial massage therapist, started his own business, married and had four children – which is a confirmation of the message in his book. These days Lorin is a professional musician and motivational speaker.

One thought on “Book Review : The Amazing Bike Ride”