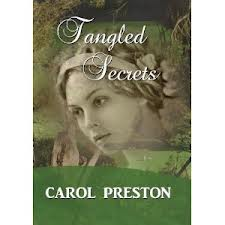 Tangled Secrets has been featured on the Australian Christian Readers Blog Alliance. Information about the author and more details about the book can also be found here.

Tangled Secrets is a historical fiction story written by Carol Preston. It has been well researched and set in the early 1800’s in the area inland from Sydney. It describes the life of the early settlers particularly focussing on one family and one female character. Tangled Secrets is an accurate title for the book as secrets from the past and new secrets complicate people’s lives in the present.

I found the characters very believable. A couple even reminded me of people I knew! Being set in Australia was a great bonus as I’m familiar with the history, the topography and even the climate.

I enjoyed the way Christian elements were woven into the story. There were no great epiphanies but an acknowledgement of God which reflected the period when it was written. Characters expressed faith, or lack of it, in different ways which gave the story a realistic feel. By the end of the book I realized that the theme of trusting God whatever happens had been threaded through the story without it being obvious. Likewise God was subtly portrayed as being gracious and forgiving.

I had not read the previous two books in the series and it is not necessary to do so as the story is complete in itself.

Thanks to Even Before Publishing for providing a free book for review.

Some won’t receive God’s love. How sad is that!